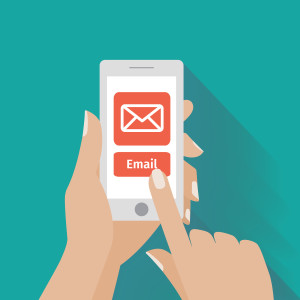 There is, however, another form of social media that has been around before Facebook and the many others – e-mail. Yes, e-mail, those messages that arrive in your inbox several times a day.

With the rise of smartphones and iPads to complement desktops and laptops, people have various devices on which they can check their e-mail. As I noted in an earlier post, mobile phone usage has grown exponentially, with 64% of Americans owning a smartphone, according to Pew.

According to research from The Radicati Group, “The number of worldwide email accounts continues to grow from over 4.1 billion accounts in 2014 to over 5.2 billion accounts by the end of 2018. The total number of worldwide email users, including both business and consumer users, is also increasing from over 2.5 billion in 2014 to over 2.8 billion in 2018[,]” as shown in the graph.

Good news! Obviously, e-mail marketing should be a part of your marketing strategy.

When it comes to selecting which time of day, or which day of the week to e-mail your target audience, it takes testing. For some brands, their target audience may read their e-mails on Friday night at 10 pm, while for others, it may be any other day or time of the week.

If you’ve never heard of SMS phishing, or SMiShing, you’re not alone. Most people aren’t aware of … END_OF_DOCUMENT_TOKEN_TO_BE_REPLACED

Have you been searching for an efficient way to stay connected to your customers? Customer … END_OF_DOCUMENT_TOKEN_TO_BE_REPLACED

The consumer data that companies are able to access is growing each and every day. Many companies are using this data for internal decisions and gains. McDonald's, instead, used it to give a free meal to someone going through a tough time. Human compassion and consumer visibility for the win!

A Customer Found a Short Note With Their McDonald's Delivery. It's a Master Class in Marketing

Wishing you a SPARKling Independence Day with Family & Friends! 🇺🇸💙

SPARKS! will be closed today in honor of the holiday. We will reopen tomorrow, Tuesday, July 5th. ... See MoreSee Less