You are here: Home / Archives for seniors 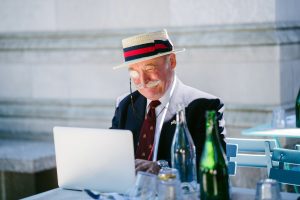 More seniors than ever are using platforms like Facebook for a variety of reasons, and that number is only going to rise in the coming years. Love it or hate it, social media has never been more essential to daily life. Want to keep in touch with your kids, grandkids, and old friends? Stay up to date on world events and relevant cultural touchstones? Without social media, that can be tough to do. But how are today’s social media savvy seniors using these tools, and how are advertisers taking advantage of their online presence?

Talk to someone in their teens or early 20s and they’ll say that while they probably still have a Facebook account, Instagram and Snapchat are their preferred apps. Facebook is a place they go to keep in touch with family, like the many baby boomers who are gravitating towards the site.  In fact, a recent Gallup poll found that 52 percent of people ages 50 to 64 and 32 percent of those 65 or older use Facebook.

What does the 60+ generation use sites like Facebook for other than commenting on family photos? Sharing inaccurate news, of course! Older Americans are more likely to share “fake news” online regardless of education, sex, race, income, and even party affiliation. So, while people who grew up on the internet have honed their ability to verify what is and isn’t a credible source, the baby boomer generation still struggles with discerning fact from fiction online.

Aside from using Facebook to proliferate the rising trend of false news, most older people are using it for the same reasons that we all do. They want to keep up to date with friends, family, and loved ones throughout the year.

Old and young users aren’t just using social media for different reasons, they also have separate concerns. According to AARP, seniors are much more anxious about protecting their privacy online, with 52 percent of Facebook users over the age of 50 concerned about how their data is getting used. Just 39 percent of 18-to-49-year-olds share the same worry.

So, how do you target seniors online in a way that entices them? Women in this age group are 26 percent more likely to share content online than men of the same age, so gearing your advertisements towards them is one place to start. Boomers also want to share content that’s meaningful and worthwhile with like-minded boomers, so focus more on substance rather than the snappy and clever slang that might appeal to younger users. Like most people, they also prefer messages and graphics that elicit a positive emotional response.

According to Adweek, older users are much more likely to be influenced by online advertising than their younger counterparts. Although they make up just a small percentage of Instagram’s user base, those who are on the app between the ages of 65 and 74 are most likely to search for the advertised product after seeing a promoted post. Common sense suggests that this holds true against all the social media platforms, Facebook included.

As social media becomes a more imperative part of the human experience with each passing year, the number of seniors who not only use the platforms but are comfortable and competent navigating them will only increase. Like with every demographic, it will be up to advertisers to stay afloat among ever-changing trends and user behavior to create content that grabs their attention.

If you’ve never heard of SMS phishing, or SMiShing, you’re not alone. Most people aren’t aware of … END_OF_DOCUMENT_TOKEN_TO_BE_REPLACED

Have you been searching for an efficient way to stay connected to your customers? Customer … END_OF_DOCUMENT_TOKEN_TO_BE_REPLACED