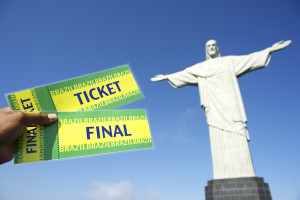 In a few days, FIFA’s World Cup 2014 will officially kick off in Brazil. Undoubtedly, this is the world’s largest sporting event. In 2010, when the event was held in South Africa, FIFA’s research showed that over 3.2 billion people watched live coverage for a minimum of one minute, viewership for each match was 188.4 million, while 619.7 million viewers watched 20 successive minutes of the final in which Spain beat The Netherlands 1-0. FIFA expects the World Cup 2014 to exceed those numbers.According to FIFA’s television director, Niclas Ericson, there are “very good kick off times for Africa, the Middle East and Europe . . . And as the World Cup is in the Americas, we’ll have even better figures from there than ever before.” This, undoubtedly, is a marketer’s dream.

With the growth in technology in the last four years, it is possible to exceed those numbers, with more people using the internet, mobile phones and tablets for entertainment purposes. This presents many opportunities for marketers to reach their audiences in many parts of the world. As well, marketers will tailor their message to suit each region or country where the event is being broadcast.

In an article by Jordan Rost, Brad Johnsmeyer and Allison Mooney, “In 2010, 18% of seacrhes for games, players and teams during the World Cup final were done on a mobile device. Compare that with 2014, when 63% of those searches during a popular UEFA Champions League match were done on mobile – an early indicator of what we’ll see during this year’s World Cup.” Their research also shows that there are 1.6 billion views of soccer content on YouTube globally.

If you’ve never heard of SMS phishing, or SMiShing, you’re not alone. Most people aren’t aware of … END_OF_DOCUMENT_TOKEN_TO_BE_REPLACED

Have you been searching for an efficient way to stay connected to your customers? Customer … END_OF_DOCUMENT_TOKEN_TO_BE_REPLACED